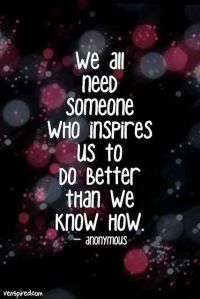 We all need someone who inspires us to do better than we know how. – anonymous

When I had been applying for jobs in Lafayette, I had completed an application on the Purdue University website. Even though my background was in academic advising, I wasn’t directing my search in that area. I did not have confidence that I could withstand the kind of stress that came with that particular kind of job. Instead, I was applying for jobs within the print shops and other ‘non-academic’ jobs.

So, when I received a call in May to see if I was interested in interviewing for a position in academic advising, you can imagine my shock. Come to find out, they performed key word searches on previous job titles and found me by searching the terms “academic advisor.”

I wanted a job that paid more so that I could get a place of my own, so I said, “Sure.” They informed me that they would forward my name to the director of advising for the College of Science and he would set up the interview.

When Alan Welch phoned me, I made up a story and said, “If you don’t mind that I’m not in typical interview attire I can be there in a couple of days.” I claimed that my interview clothes were in the back of a storage unit. Truth was…I really just didn’t want to put on a suit. I had quit wearing dresses and I really didn’t think I would get the job anyhow.

I was not nervous at all the night before. I did NOTHING to prepare. I didn’t think of any questions he might ask, or even come up with any questions of my own. I truly was just placing it in God’s hands. If I got the job, good…if not, I was fine with that as well.

On the day of the interview, I put on some blue slacks and a white striped button down shirt. I got turned around on campus and ended up parking pretty far from the Math Building which made me a few minutes late to the interview. I don’t even remember if I had a folder or anything with me. In my mind, I was just going on faith.

Alan and I had a good visit. I ‘made up’ my answers as we went along. At the end of the interview when he asked for my updated resume, I got creative once again and told him my printer wasn’t working but I could email it to him by the end of the week. Truth be told, I hadn’t even updated my resume. I left the interview with no expectations. I honestly thought I would just get a letter saying they had chosen someone else.

Imagine my surprise when he called to see if I could begin working in a couple of weeks!

Thus began my career as a computer science academic advisor in the College of Science at Purdue University! THIS girl who attended a small liberal arts school in Texas was now working in a highly sought-after field at a Big Ten research university! I was in complete awe!

I began working during the most intense time of the year. The entire month of June is devoted to daily visits from the incoming freshmen. Each day had a new batch of students and parents. By the end of June I would meet with approximately 100 of my new student advisees. I guess because I knew I would have almost two months off before I returned to work, the intensity of June was not overwhelming and I performed fine with no medication.

I returned in mid-August just before classes started and began my new daily routine. It didn’t take long before I realized I would definitely need to get back on medication if I were going to have a chance of being successful in this position. Sometime in September I began seeing my primary doctor and was prescribed an antidepressant again.

The combination of a medication and a great leader in my supervisor, Alan, made for a great couple of years. Alan saw potential in me that I never imagined possible. By the end of December, along with my regular advising duties, I had become involved with the campus advising organization, PACADA – Purdue ACademic ADvising Association, and would take on the challenge of redesigning their website.

This was just the beginning of my involvement in advising organizations. By the end of my career there, I would become actively involved in the campus, state and national organizations. I held leadership roles as well as presenting regularly at the various conferences. I believe I was one of the first to present on the idea of “Computer Addiction” at the national advising conference. (RIP Midge Keller…without your encouragement to present, I might never have had the confidence to begin what has become a passion for me.)

I LOVED my students. Unlike my position at Odessa College, I was able to really build relationships with these students. Some I only saw when it was time to register for classes; but others I saw more regularly. I am very pleased to still be in contact with some of my very first students!

The students are really what made the job bearable as leadership changed hands and more strict rules were put into place. My stress had been held in check for a couple of years because of the flexibility I had been given. Once that was taken away, the daily struggles to get up picked up again in earnest.

By 2004 medication alone was not enough and I began seeing a therapist once again. Rebecca would become a regular in my life…at times, the one thing I could count on in a given week. I was, once again, calling in late for work, or missing work altogether. I would set my alarm for an hour earlier than I needed to get up in hopes that I could convince myself to get up and go in to work on time. I hit the alarm every five minutes for over an hour before I would finally give up and decide to call in to work.

Each time, without fail, that I had decided it was time to quit work, a student would show up in my office and remind me why I couldn’t quit. They did this either by their actions or their words. THEY are the reason I stuck with the job until 2008 despite seriously considering leaving not only the job, but life as well, in 2005.

© Criselda Marquez and Embracing Life: 4/29/10, 2014. Unauthorized use and/or duplication of this material without express and written permission from this blog’s author and/or owner is strictly prohibited. Excerpts and links may be used, provided that full and clear credit is given to Criselda Marquez and Embracing Life: 4/29/10 with appropriate and specific direction to the original content.
%d bloggers like this: